Group events and rentals are not allowed at this time.

Fantasy of Lights will run from December 1-31, Click here for more info.

The beautiful black waters of Swan Lake form the setting for the spectacular Iris Gardens. The lake is dotted with colorful islands, and wildlife is abundant. The only public park in the United States to feature all eight swan species, Swan Lake Iris Gardens is also home to some of the nation's most intensive plantings of Japanese iris, which bloom yearly in mid to late May and last until the beginning of June. The garden also boasts many other floral attractions, including colorful camellias, azaleas, day lilies, and Japanese magnolias. A Braille Trail enables the sight-impaired to enjoy the scents and sensations of the gardens, and a Butterfly Garden and Chocolate Garden both delight the senses.

The garden hosts several annual festivals throughout the year, including SC's oldest festival, the Iris Festival, Earth Day Celebration, Recovery Road Race, an Easter Egg Hunt, the Taste of the Gardens and the Fantasy of Lights, to name a few.

Swan Lake Iris Gardens began in 1927 as a private fishing retreat for Hamilton Carr Bland, a local businessman. At the same time he was developing the 30 acres of swamp on what is now the north side of West Liberty Street, he was landscaping the grounds of his home with Japanese iris. They failed miserably, and after consulting expert horticulturists from as far away as New York, he ordered his gardener to dig up the bulbs and dump them at the swamp. The following spring, they burst into bloom. The accidental garden, referred to by Southern Living magazine a "lovely mistake," has since been developed into one of the finest botanical gardens in the United States.

Following Bland's lead, in 1938 Mr. A.T. Heath, Sr., deeded the additional acreage on the north side of Liberty Street to the city with the stipulation that Mr. Bland also develop this part of the gardens. Today, the Heath Gardens encompasses most of the park's 120 acres. Mr. Bland deeded the Bland Gardens to the city in 1949. The two gardens are joined by the McDuffie Overpass, a gift to the city from the McDuffie family in 1994. The Heath Pavilion opened in 2002 at the rear of the Heath Gardens on property given to the city by the Heath family in 1998. 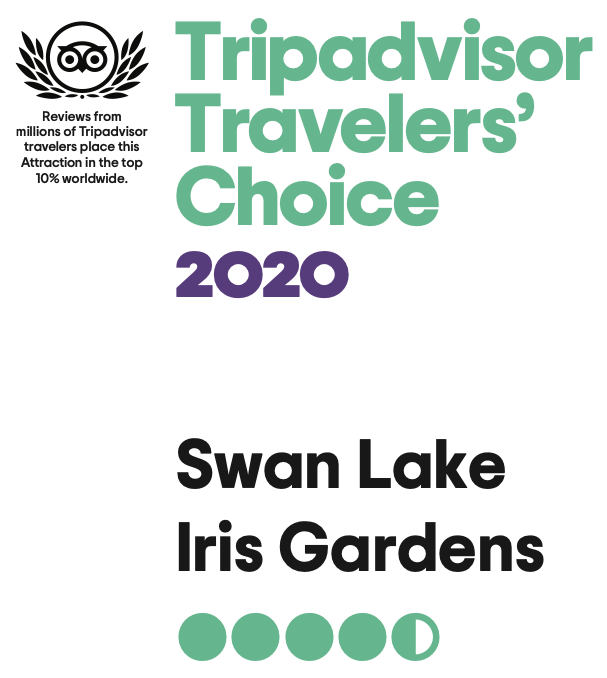 Guide to DragonFlys at Swan Lake

Guide to Other Birds at Swan Lake

Garden Hours:
Daily from 7:30 AM to Dusk
except during inclement weather and the Iris Festival

Events at the Gardens:

Admission to and parking at the gardens is free.