Swan Lake extraordinarily unique as it is home to all eight known species of swan. Our staff maintains a safe and enjoyable environment for our swans year-round with food and care. Our "Swan-dominiums" provide shelter for young or ailing swans or during times of inclement weather (although the swans love the summer rains here in Sumter, South Carolina). We invite you to come experience these beautiful creatures, but please keep in mind that they are in their natural habitat and can be territorial. Please do not attempt to touch or handle the swans in any way and please do not feed the swans or other wildlife in the park. 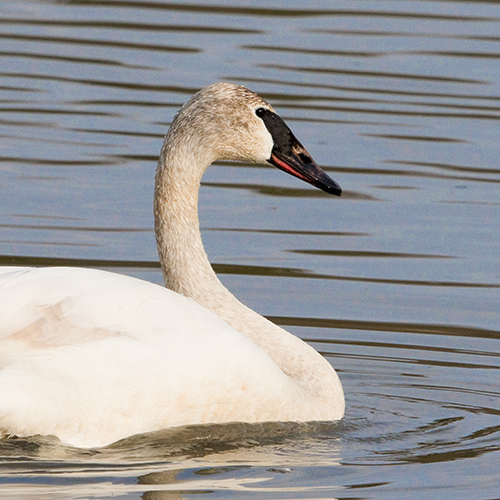 The Trumpeter Swans breed in North America, southern interior Alaska, Alberta, British Columbia, Montana, Idaho, and Wyoming. Generally, they remain in the breeding area until the water is frozen. Alaska's population of Trumpeter Swans will migrate to the coast of British Columbia. The female lays four to eight white eggs. Their nests are made from sedge and other aquatic plants on top of muskrat lodges surrounded by water. Occasionally these nests are on the marshy ground far from the open water. The incubation period for the eggs is from 33-37 days. The Trumpeter is known for its unique call. 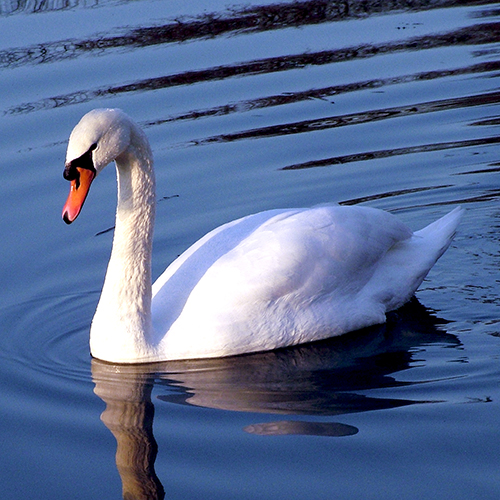 The Mute Swan was introduced to North America, Australia, South Africa, China, and New Zealand after being bred in the British Isles to Mongolia. Most winter within their breeding range while others go South in the Southern U.S.A., Mediterranean and Southwest Asia. The female (pen) lays four to eight greenish-blue eggs in a nest of huge piles of reed stems, leaves, roots and sticks. This material is located on a bank or an island, or in shallow water. Both birds gather the material, but the female builds the nest. Incubation is usually by the female alone within 35-40 days. Mute swans can weigh as much as 20 pounds and are one of the largest birds known to the British Isles. Their normal life span is 6-7 years, but there have been records of Mutes over 20 years old. 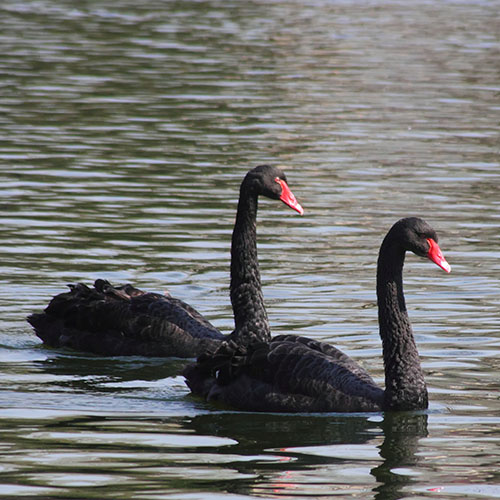 The Black Australian Swan's breeding area is in Australia. The cobb generally will weigh up to 14 lbs., while the female weighs around 12 lbs. The female lays four to ten pale green eggs. They build their nests in colonies. The site for these nests is chosen frequently on a sedge island in a lake or lagoon. Incubation is shared by males and females for about 34-40 days. These Swans are the most social of the swans and during the breeding season will often nest in loose colonies. Most other swans will not tolerate other pairs anywhere near their nests. 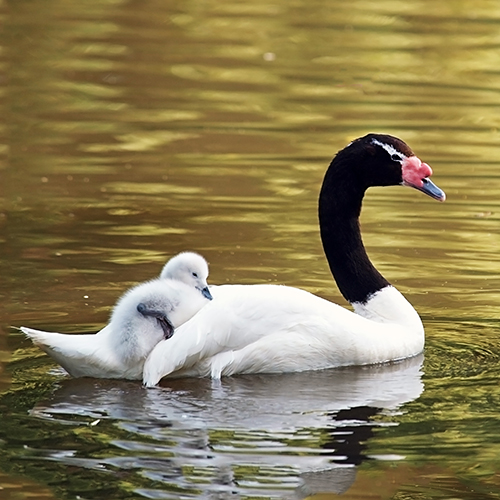 The Black-Necked Swan migrates to the Northern Hemisphere after breeding in the southern third of South America and the Falkland Islands. Generally, those living in the Falkland Island area do not migrate. The female swan lays from four to eight cream-colored eggs. After building the large bulky nest of plant material, the female incubates the eggs for 36 days. The average weight of a Black-Necked Swan is 9-12 lbs. 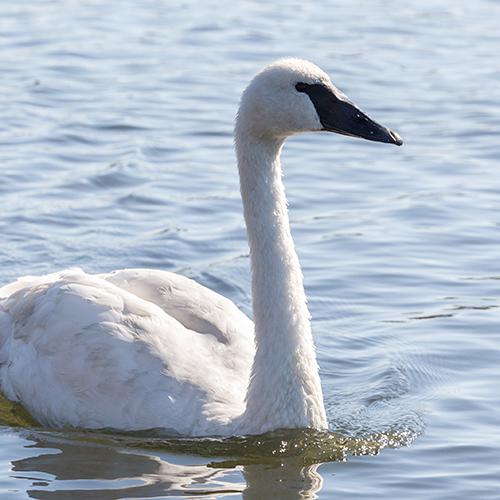 The average weight of the female is 13 1/2 pounds and males are 15 1/2. Their breeding area is the North American tundra. They are also bred in China. The Whistler Swans winter along both the Atlantic and Pacific Coasts and southern China. Making nests on tundra along shores of lakes or ponds, and occasionally on islands. The female lays from three to five white eggs, which take 30-32 days to incubate. These swans are white with a black beak and a yellow dot below the eye. Normally swans mate once a year and are very protective of their territory during this time. Whistlers mate with one partner for life and don't mate outside their own species. 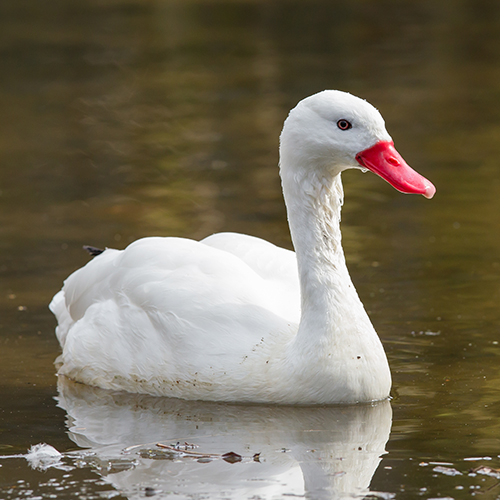 The average weight of the male (cobb) Coscoroba Swan is 11 lbs. Females weigh an average of 8-8 1/2 lbs. They breed in the southern third of South America and in the Falkland Islands. If a bad winter occurs, they may move north to Chile, Uruguay, and southern Brazil. The females lay from four to seven creamy white eggs. The nests are made up of mud and aquatic vegetation near the edge of the water. The female incubates alone for a period of 35 days. These swans have pure white feathers with a pink beak and pink legs. 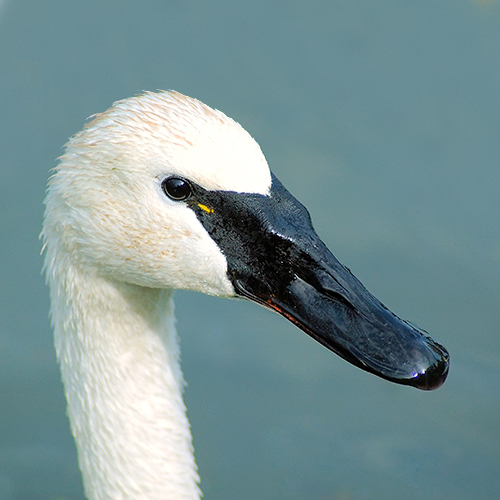 Bewick
(Northern Russia from the Kanin Delta to the Lena Delta, migrates to parts of Japan)

The Bewick Swan is native to Northern Russia from the Kanin Delta to the Lena Delta. The swan has also migrated to parts of Japan and winters in the British Isles, Northern Europe, Denmark, and Ireland. Their nests are generally made on small islands in river estuaries and lakes, or near tundra pools. They usually lay three to five eggs, which are incubated by the female alone for 29-30 days. Bewick swans pair up for life, and the death of one partner usually leads to the death of the other. 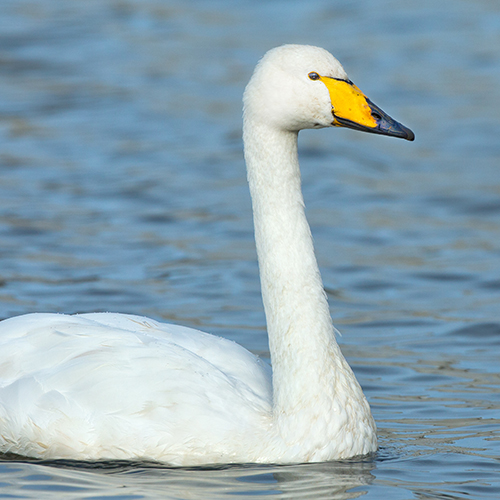 The Whooper Swan winters in Great Britain, Northern Europe, Asia Minor, Northern India, China, Japan, and Korea. The pen usually lays from 4-6 white eggs. They build a bulky nest of moss, aquatic grasses, and some mud on small islets, close to puddles in boggy areas, and along calm parts of rivers. The same nest may be built up and used for many years. The female incubates the eggs for 31-40 days. These swans are white with a bright yellow beak. The Whooper swan nests for the first time when it is 3-4 years old. The birds pair off when they are 2 years old. Although most swan pairs are for life, this breed has an unusual 6% divorce rate! The noisy Whooper was recently taken off of the endangered species list.