In the life of the old Sumter District, churches filled an important need not only as places of worship but as community centers where settlers socialized, discussed the issues of the day, relaxed and nurtured one another's spiritual growth. Sumter County is home to numerous churches whose congregations have celebrated their 100-year anniversary.  However, four of particular interest in the area pre-date the American Revolution. 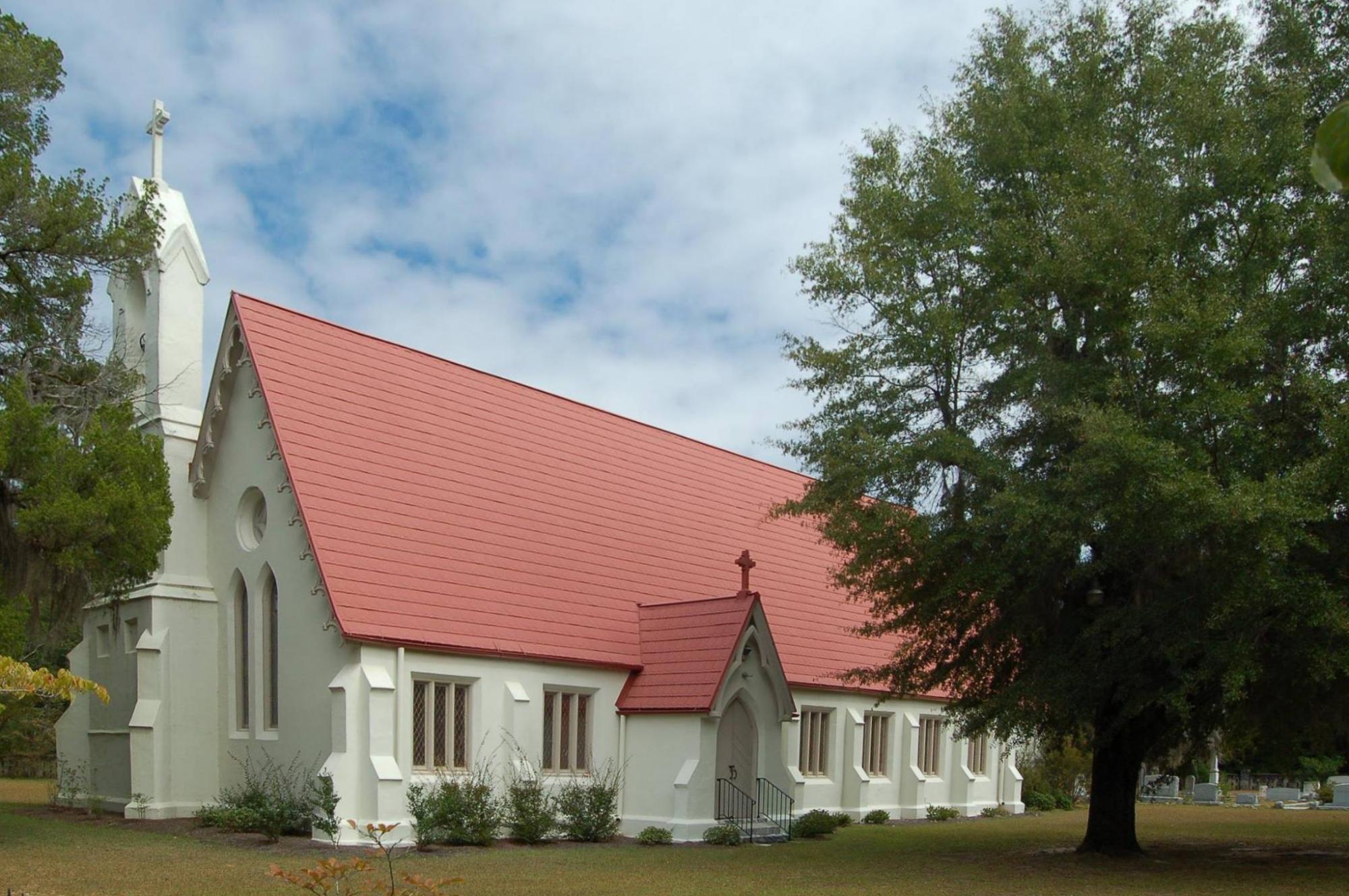 The first church organized in Sumter District, St. Mark's origins can be traced back to 1757 with the formation of St. Mark's Parish. The original building was constructed in 1765 and served the congregation for only a few years before being burned by Tarleton's troops. Various calamities continued to befall the church, with the result that the present building, completed in 1856, is the fourth. This beautiful sanctuary, located near Highway 261 in Manchester State Forest, has been a house of worship for six South Carolina governors. Regular services are no longer held, but the simple, elegant building stands as a reminder of an important time in South Carolina history. 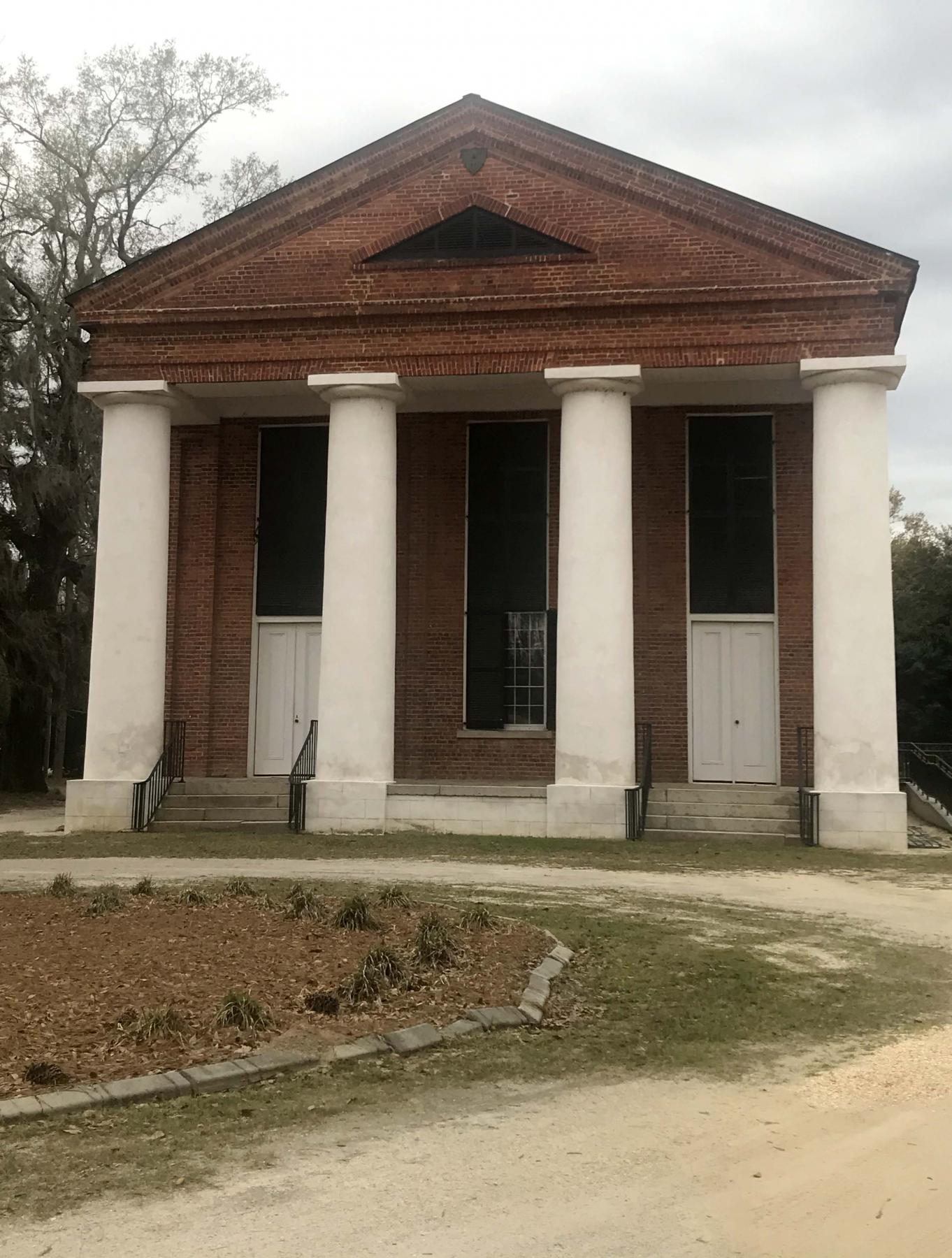 Picturesque Salem Black River Presbyterian Church, known throughout the area as "Brick Church," was established in 1759 on a tract of land given by Captain David Anderson near present-day Mayesville. The imposing brick building with its four massive Doric columns was erected in 1856, from bricks made on the grounds of the church.

Over the years, this historic congregation has endured wars, depressions and natural disasters including the Charleston Earthquake of 1886 and 1989's Hurricane Hugo, but it continues to stand in serene testimony to the perseverance of its original Scots-Irish founders. Services are held twice a month. In 2002, a groundbreaking ceremony marked the beginning of the first new construction at Brick Church in more than 100 years.

Near Brick Church on Highway 527 stands Goodwill Presbyterian Church, organized in 1867 by 100 African-American members of Salem Black River Presbyterian. The Goodwill Day School on the church grounds is listed in the National Register of Historic Places.

The Episcopal Church of the Holy Cross (1770) 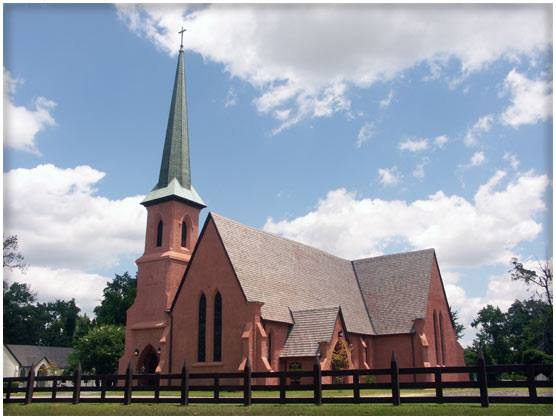 The area's earliest Episcopal church, St. Mark's Parish near present-day Pinewood, was a difficult Sunday drive for worshippers from the other side of the King's Highway. In 1770, a Chapel of Ease was established in Stateburg for the convenience of those worshippers who found the trip to St. Mark's too arduous. By 1788, the congregation had outgrown the small building and constructed a new one on land donated by General Thomas Sumter. Claremont Episcopal Church had been born and served the spiritual needs of the Stateburg community for 60 years until it too was outgrown. The Church of the Holy Cross was built on Highway 261 in Stateburg in 1850.

The Victorian Gothic building is one of few in the United States constructed entirely by the ancient pise de terre (rammed earth) method, used in sections of the Great Wall of China. The stained glass windows were crafted in Bavaria after the designs of the renowned Frederich Auerbach, and in the sanctuary is an Erben pipe organ from New York, installed in 1851 and one of the few working examples of this type. The Church of the Holy Cross was designated a National Historic Landmark in 1973.

One of the most beautiful churches in the state, Holy Cross has been the house of worship for many South Carolina notables. The adjoining cemetery contains many interesting tombstones; among them are those of more than 100 veterans of the American Revolution, the Civil War and WWI. Perhaps the best-known tomb is that of Joel Roberts Poinsett, who died in Stateburg in 1851. Poinsett, a statesman, diplomat, scientist and botanist, served as US Ambassador to Mexico and was responsible for the American adoption of European-style military methods. He also introduced to America the beautiful red-leaved plant that graces millions of homes during the Christmas holidays and bears his name--the poinsettia.

Holy Cross has survived earthquakes, hurricanes, tornadoes and other natural disasters, including a 1903 storm that tore off the 110-foot steeple. At the dawn of the millennium, the church faced the most serious challenge to its continued survival. In 1974, termites were discovered following a partial collapse of the southwest wall due to leakage. In 2001, the termites, thought to have been eliminated, were found to have devastated the entire church interior. During the decade that it took to restore the church to its original beauty, the spirit of this resilient congregation was not dampened, and it celebrated a triumphant re-opening in 2010. 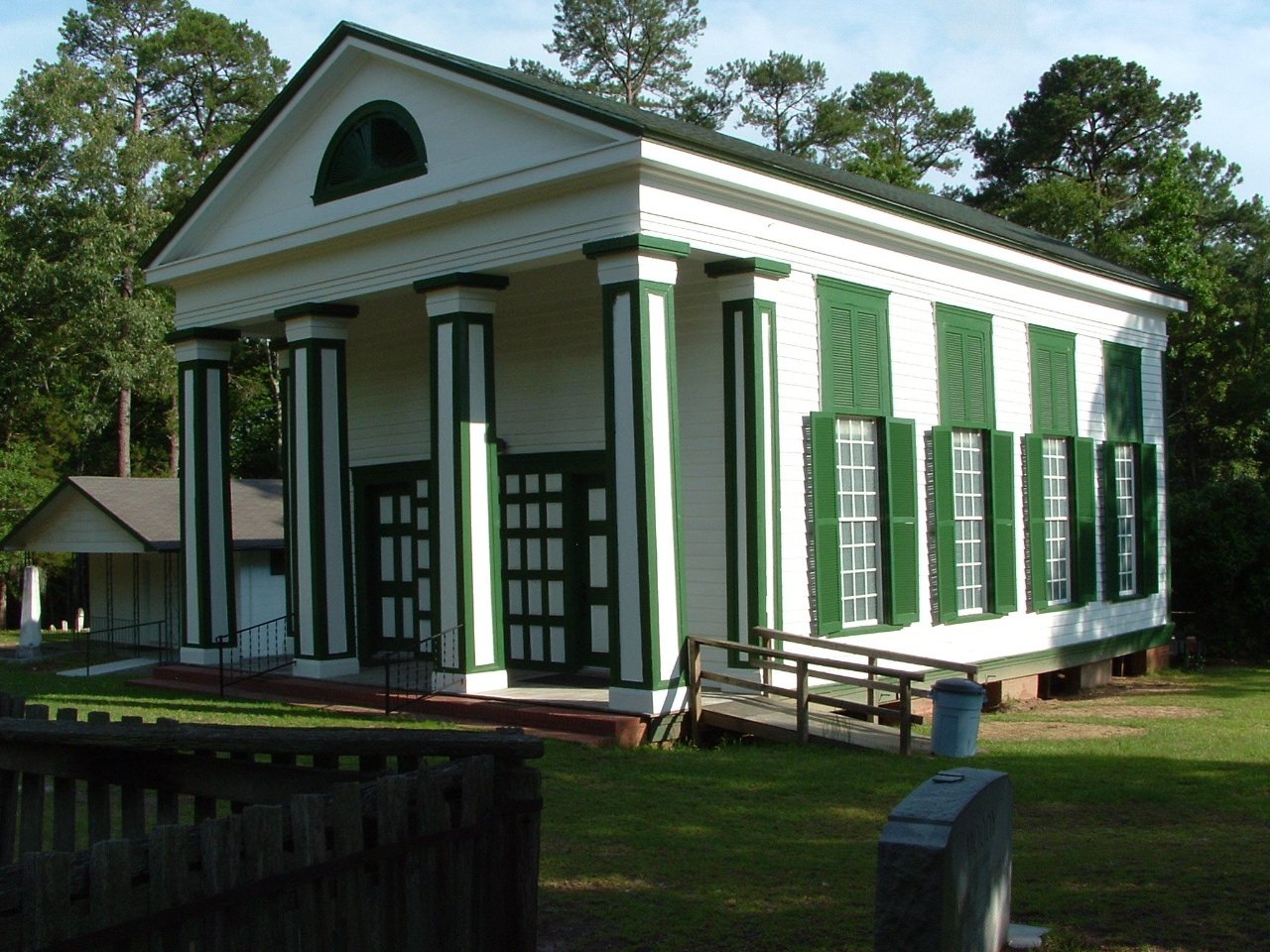 High Hills Baptist Church, founded in 1772, occupies a plot of land granted to the congregation by General Thomas Sumter. The present building, erected in 1803, is a distinctive landmark in the Stateburg area with its simple green-and-white painted frame structure. High Hills Baptist grew into a strong and influential church under the dynamic leadership of Reverend Richard Furman, the pastor from 1774 to 1787.

The leadership and members of High Hills played an important role in Sumter County's participation in the American Revolution. In April 1776, it was the meeting place for all the churches in South Carolina for the purpose of electing delegates to attend the Continental Association. Richard Furman, an activist for the Revolutionary cause, was pursued by General Cornwallis to the point that he briefly had to flee the state. Furman later founded one of South Carolina's most prestigious educational institutions, Furman University in Greenville.

High Hills at present has few members and weekly services are no longer held. However, many of the Baptist congregations in the area can trace their heritage to this strong, influential church, including First Baptist, the oldest and largest Baptist congregation in the city of Sumter.

A short distance down Meeting House Road stands another High Hills Baptist Church. The brick church, organized in 1869, was formed by the freed men and women who formerly worshiped in the gallery at the first High Hills Baptist.

Church of the Good Shepherd

Among the many churches in Sumter County, the Episcopal Church of the Good Shepherd has one of the most unique and interesting histories. It was originally built on the Frierson plantation as St. John’s Chapel, where enslaved persons were given religious instruction. In 1886, John Frierson transferred the property to a man named Bowen, who moved the building to Highway 261, where it was known as the Bowen Church. It was later used as a school. The building was purchased by members of the Good Shepherd Episcopal Mission. In 1920, this group moved the foundation and framing to the corner of Dingle and Wright streets to use in the construction of the Church of the Good Shepherd, which remains in use to the present day. View from outside; open on Sundays. (803) 775-5619. 401 Dingle Street, Sumter SC.

Church of the Holy Cross

Born in 1790 in Winnsboro, SC, William “April” Ellison rose from slavery to become one of Sumter County’s most respected citizens. The seal on Mr. Ellison’s approval as a member of the antebellum Stateburg community came with his 1844 purchase of pew #30 on the main floor of what is now the Church of the Holy Cross, for which he paid the same $35 subscription fee as his wealthy white neighbors.

The Church of the Holy Cross declared a National Historic Landmark in 1973, dates back to 1788 when Claremont Episcopal Church was established on the site. The present sanctuary, built in 1850-52, is an impressive example of the pise de terre, or rammed earth, construction method in the Victorian Gothic style. The original Erben pipe organ installed in 1851 is still in use. Many notable people are interred in the adjoining cemetery, including Joel Roberts Poinsett, first US Ambassador to Mexico, and General George L. Mabry, Medal of Honor recipient for his heroism in World War II. The church is open on Sundays. 335 North King’s Highway (Highway 261), Sumter SC. For more information, please call (803) 305-8780.

Emmanuel United Methodist Church was organized in 1866 as a “bush arbor” church, in a shed built with poles and covered with moss, on land purchased by the Missionary Society of the Methodist Episcopal Church. First pastored by the Reverend B. Frank Whittemore, the church had seen 15 members join the ordained ministry by 1890. The present sanctuary, completed in 1901, is the oldest church building of any denomination in the city of Sumter. View from outside; open on Sundays. (803) 773-6197. 421 South Main Street, Sumter.

The Baptist Church has deep roots in the African-American community of Sumter. First Missionary Baptist Church, organized in 1868 as Shiloh Baptist Church, was the first Baptist church in the city to be built by an African-American congregation. The church moved to its present location in 1910. The original building burned in 1962, was rebuilt and renovated the same year and replaced in 1977 by the present building. 219 South Washington Street, Sumter SC. First Missionary Baptist Church was the site of the founding of the State Baptist Education and Missionary Convention of South Carolina in 1877. In 1908, the Convention founded Morris College, Sumter’s first and only historically black college (HBC).

The first African-American Presbyterian church in Sumter County, Goodwill was organized in 1867 by 100 black members of Salem Black River Presbyterian Church. The first church on this site was erected in 1868. The Manse was built in 1890. Although the sanctuary was severely damaged by Hurricane Hugo in 1989, it has since been restored and Goodwill Presbyterian remains an active part of the rural Sumter County community. The Goodwill Parochial (Day) School is listed in the National Register of Historic Places. View from outside; open on Sundays.

A traveler on Meeting House Road, off the King’s Highway, might be surprised to see two churches, both named High Hills Baptist. The white frame structure belongs to one of the oldest churches in Sumter County, established in 1772. In 1774, Richard Furman was named pastor; he later founded Furman University in Greenville. The present building was erected in 1803 on land granted by General Thomas Sumter, for whom the City and County of Sumter are named. The brick church down the road is home to the congregation formed in 1869 by the freed men and women of the original High Hills Baptist Church. The present structure of the second High Hills Baptist Church was renovated in 1983 under the leadership of Reverend E.W. Palmer. The adjacent cemetery, heavily draped with wafting plumes of Spanish moss, overlooks a spectacular vista of the High Hills of the Santee, for which the churches were named. The stones date from the early 20th century. Meeting House Road.